We were delighted to welcome Ralf Little and Ricky Tomlinson to the Sir Tom Finney Preston Soccer Centre for an evening of filming in October 2019.

Ralf and Ricky were filming as part of a new TV show  ‘Ricky and Ralf’s Very Northern Road Trip’ which will see the guys travel around the North of England in a camper van!

The show will air on Gold in 2020 – we will confirm the date as soon as we have it available! 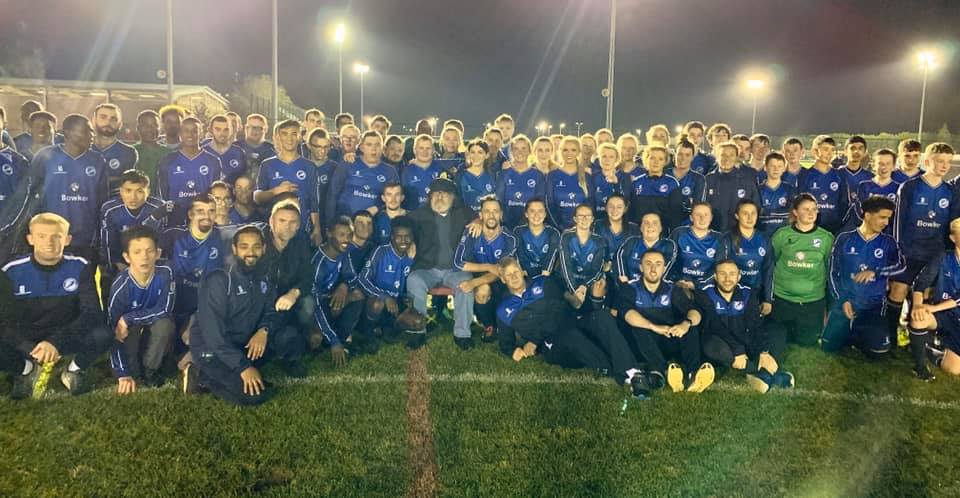 A family reunion is on the cards for Royle Family fans – with Jim and Antony coming together for a brand new six part show.

Actors Ricky Tomlinson and Ralf Little will be swapping the sofa for a campervan as they head off on a very special road trip around the north of England for cable channel Gold.

The twosome will bring their usual comedy stylings as they travel, where they’ll share memories, entertain each other and along the way discover just what sets the north apart from the rest of the UK.

Discussing their new venture, Tomlinson said: “People are always going on about exotic holidays here, luxury cruises there, finding your inner-self wherever.

“Now, don’t get me wrong, I love a bit of sun on the Med as much as the next man – but for my money, there’s everything you could ever want on your doorstep here in the north of England – and no better way to see it than in your own home on wheels.”

Little added: “I’ve been lucky enough to do a fair bit of travelling around various bits of the world – but this promises to be a holiday like no other. Weeks on the road, in a campervan with my 80-year-old TV dad. In the middle of autumn. What could possibly go wrong? Seriously, bring it on. Who knows, I may even be able to teach him a thing or two about the north.”

Commissioning editor Joe McVey said: “I’m thrilled Ricky and Ralf have agreed to tour the north in a campervan for us. It’s been in the office since someone won it on Bullseye in 1986 and we’ve been trying to find a use for it.

“Not only is this going to be a warm, frank and very funny look at an incredible part of the country we’ve also freed up a bit of desk space. It’s a real win-win for us.”

The mini-reunion comes after Tomlinson previously said he “wouldn’t entertain” a new episode of The Royle Family after co-star and creator Caroline Aherne died of cancer in 2016.

“I wouldn’t entertain it. You couldn’t do that,” he said on ITV’s Loose Women. “It would be like sailing the ship without the captain. What she done was amazing and it belongs to her and Craig [Cash – The Royle Family’s co-creator].”

Ricky and Ralf’s Very Northern Road Trip will air on Gold in 2020.

Get in touch with us today, using our handy form and we will get back to you!